Thank you for a powerful day in Salem to stop Jordan Cove LNG!

We are still blown away by the #noLNG events in Salem last Thursday. Nearly 1,000 impacted landowners, tribal members, fishers, students, climate advocates, and more came to Salem to send Governor Kate Brown a clear message that now is the time to stop the Jordan Cove LNG export terminal and fracked gas pipeline.

Thank you to everyone who showed up, made phone calls and sent text messages, talked to their neighbors, cooked meals for volunteers, and more to make this incredible day a huge success.

With only a few months before the federal government can approve the use of eminent domain and tree clearing on private lands, now is a critical moment to pressure Governor Kate Brown to stand with our communities. Oregon state agencies have two critical permit decisions coming up in early 2020.

At the rally, we heard from the Chairman of the Klamath Tribes, a Douglas County rancher who would face eminent domain if the pipeline was approved, a commercial fisherman from Coos Bay, indigenous activists working to protect the Klamath river, Oregon Representative Pam Marsh & Senator Jeff Golden, South Medford high school student who recently helped plan their school’s climate strike, and more. You can watch the whole rally here.

Each speaker had a clear ask for Governor Brown -- stand with our communities and oppose Jordan Cove LNG now. 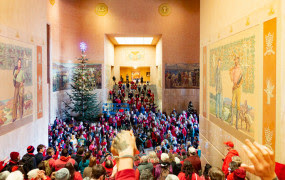 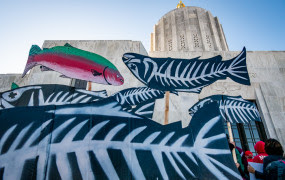 But the day didn’t stop there. While the Capitol was filled with singing, ten impacted community members started a peaceful sit-in inside Governor Kate Brown’s office – this group included landowners on the pipeline route, impacted tribal members, a former Department of State Lands employee and Coos Bay resident, a faith leader from the Rogue Valley, a mother from Klamath Falls, a Southern Oregon University student, and former Oregon Secretary of State Bill Bradbury.

These ten were quickly joined by by 65 more people for a total of 75 people inside Governor Brown’s office. Read more about the sit-in in a press release here. 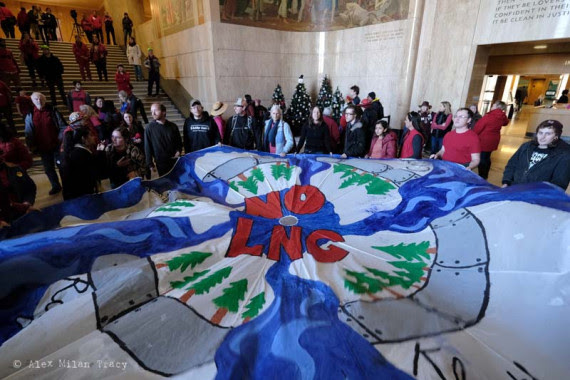 For over eight hours inside the office, people shared stories from their communities about the fight to stop Jordan Cove LNG, sang songs, spoke about local solutions to climate change, and urged Governor Kate Brown to take a stand against Jordan Cove LNG. With state and federal permit decisions coming so soon, taking action in Governor Brown’s office was a critical step to show that our communities have a lot on the line and are relying on her to stop this project.

Unfortunately, Governor Brown refused to take a public position against Jordan Cove LNG on Thursday. Governor Brown did make two appearances (one on the phone) at the sit-in to hear the stories of the people taking action in her office and to assure the crowd that she would fight federal rollbacks of Oregon’s laws that give the state decision making powers on this project.

At the end of the evening, 21 brave community members peacefully refused to leave the office until Governor Kate Brown joined our communities in opposing the Jordan Cove LNG Project and were arrested by Oregon State Police. Everyone has been released and is safe and sound at home. 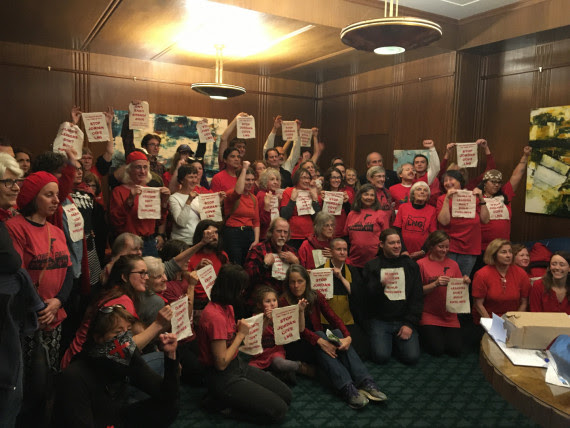 Our partners at Southern Oregon Rising Tide are supporting these brave community members, and have created a fundraising page to support any future legal costs. You can donate to the legal fund online here.

The next few months are a critical time in this campaign. In early 2020, the state of Oregon has two more key permit decisions that they will be deciding on and the Federal Government will be making their decision.

It is up to all of us to ensure the state of Oregon denies permits and stops that Jordan Cove LNG for good so that our communities can move on to creating good-paying local jobs in renewable energy.